The Commanderie de Bordeaux Australian Chapter Limited was incorporated in 2012.

It is affiliated with a worldwide network of 82 Commanderies in 26 countries under the overall patronage of the Bordeaux-based Grand Conseil du Vin de Bordeaux (GCVB).


The members ("Commandeurs") of these chapters get together periodically for dinners (called "parlements" from the French verb parler, to talk) and other events in order to enjoy, discuss and learn more about the wines of the various Bordeaux regions in their different vintages.
Through their passion for these wines, the Commandeurs become emissaries of the Bordeaux winemakers to their several localities, with the goal of broadening the appreciation of the wines of Bordeaux in Australia.

"Bordeaux, toujours Bordeaux" In 1996, the Grand Conseil de Bordeaux declared a contest for the composition of an anthem in praise of Bordeaux wine. Commandeurs from around the world were encouraged to participate. Submissions came from Europe, French-speaking Canada, and the United States. 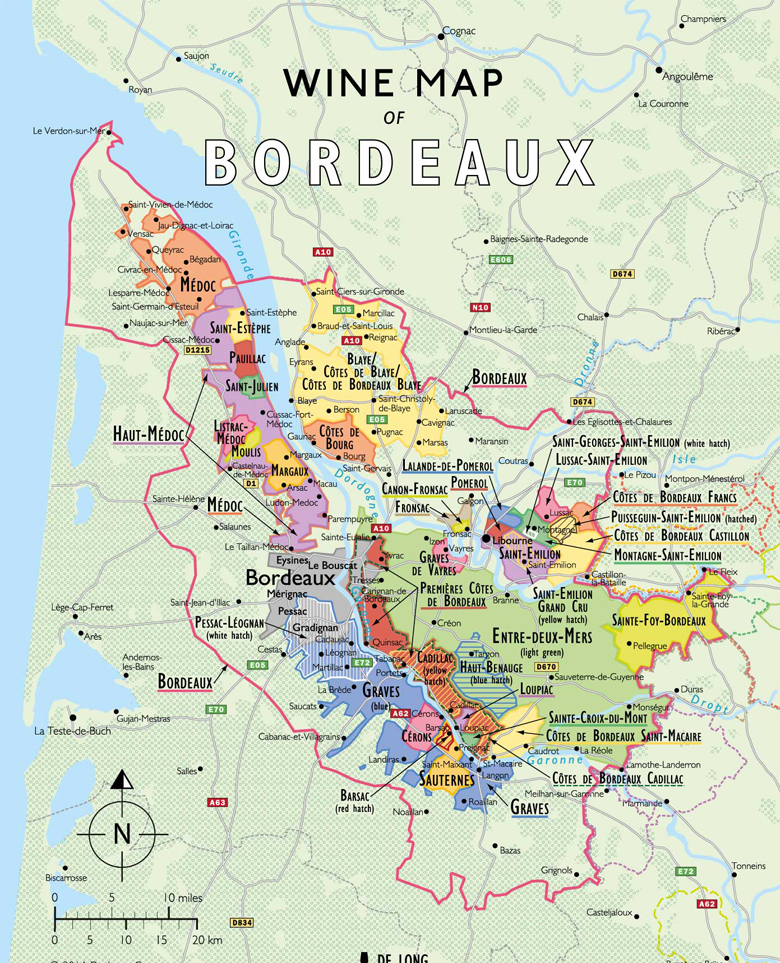 In the Middle Ages, a “Grand Conseil” was an assembly of wise men and leading citizens who were to give advice and propose the best course of action to take.

It is in this spirit that Henri MARTIN, a key figure in the Bordeaux wine industry, decided in 1952 to found a “Grand Conseil des Vins de Bordeaux” – to promote the wines of Bordeaux. In 1975, after a maturation time similar to that of a good wine, the “Grande Commanderie de Bordeaux” was officially born, with the main goal to confederate all Bordeaux wine brotherhoods and to promote the wines of Bordeaux worldwide.

The custom of assembling wise men and leading citizens into councils (conseils) to make important decisions for the good of the commune goes back in France to the Middle Ages. The debates in council, enriched by the differing points of view expressed, thus became a unique tool of reflection and decision. In this tradition, 15 wine regions in Bordeaux had formed each their own brotherhood (confèrerie), some dating back hundreds of years. Each of these, with distinctive robes, was an association of wine growers and traders that undertakes to maintain local tradition, to defend and promote its wines, and to communicate their own winemaking principles. But from a marketing point of view, there was no uniform action.

Up until recently, there were 84 Commanderies of Bordeaux in the world, throughout 25 Countries, composed of 4,500 collectors and enthusiasts of the Wines of Bordeaux.
On June 2nd 2012, the 85th Commanderie was established in Australia, with a grand reception held at the French Ambassador’s residence in Canberra. Australia became the 26th country to become a Chapter of this noble international brotherhood.
The Australian Chapter of the Commanderie de Bordeaux is presently conducted by Simon Clatworthy.

The current President of the GCVB is Francis Boutémy who also serves as the world Grand Maître of the Commanderie de Bordeaux at headquarters in Bordeaux itself.

The Song Music & Lyrics Bordeaux, toujours Bordeaux was composed by Eric E. Vogt, Maître of Boston, and presented live at a gathering of the Grand Conseil de Bordeaux at Châteaux de Roquetaillade, June 25, 1998. Vogt's anthem was declared a winner on the spot by the Grand Maître Jacques Hébrard, and Vogt was awarded "his weight in Bordeaux wine." Fortunately the weigh-in occurred after dinner.

The Commanderie de Bordeaux is a vibrant, growing organization worldwide.

After several years of faithful and effective service as Vice Grand Maître des Commanderies, Francis Boutémy has just been installed as Grand Maître of the worldwide organization. He succeeds Hubert de Boüard, proprietor of Château Angélus and also Grand Maître of the Jurade de St. Émilion. A quarterly newsletter in both French and English is now being sent to all Commandeurs from the Commanderie headquarters in Bordeaux.
A further innovation in the governance structure of the organization is the creation of the Conseil des Grands Maîtres Territoriaux, where certain designated Grands Maîtres representing broad sections of the globe meet to discuss basic policy and to advise the overall Grand Maître des Commanderies in Bordeaux.
Every four years, all Commandeurs are invited to Bordeaux for a three-day Congrès Mondial colloquium, the last having been held in 2016.

The Commanderie also is working to address some basic issues.
Wine production worldwide has soared to meet ever-increasing demand, especially in the New World. But in France, the per capita consumption of wine has dropped by half over the last 20 years, as the consumption of wine becomes an act of connoisseurship rather than just a beverage.
This has put downward pressure on most of the 8,000 separate châteaux in the Bordelais. Yet the 150-odd highly classified Bordeaux wines are selling at astronomic prices, often to speculators and newly interested consumers from the Orient.

Commanderies thus continue their dual roles as gathering places for like-minded gastronomes hewing to a grand tradition, while also making others aware of the glories of the full range of the wines of Bordeaux.

The Medallion All the regional brotherhoods have their special regalia. It was only fitting that the GCVB follow suit. Accordingly, the medallion we wear was developed. The shape of the shield represents a glass of red Bordeaux wine, though perhaps over-full for proper tasting... The fleur de lys (the historic symbol of France) in the chief or top segment symbolizes the bouquet of the wine. Below, each of the letters "GCB" (an abbreviation of the Grand Conseil du Vin de Bordeaux) is bordered by a crescent moon recalling the fact that the all-important port of Bordeaux was once known as the Harbor of the Moon. 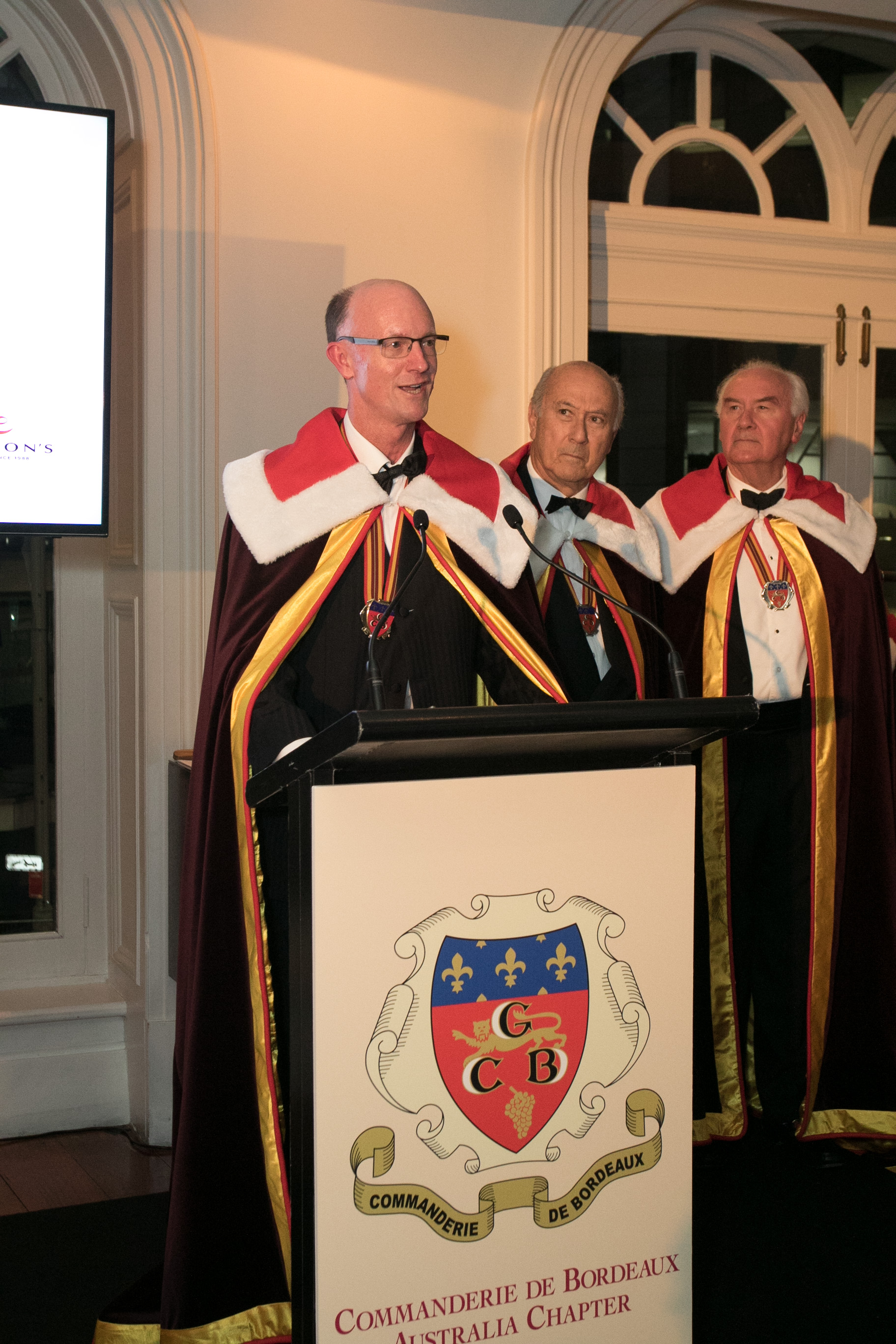